It’s healthier to lose weight before you get pregnant

Before she got pregnant in 2014, Lizzy King, 28, of East Lansing gave herself a lifestyle overhaul. She started running and lost 50 pounds. She eschewed processed food and ate her first banana. 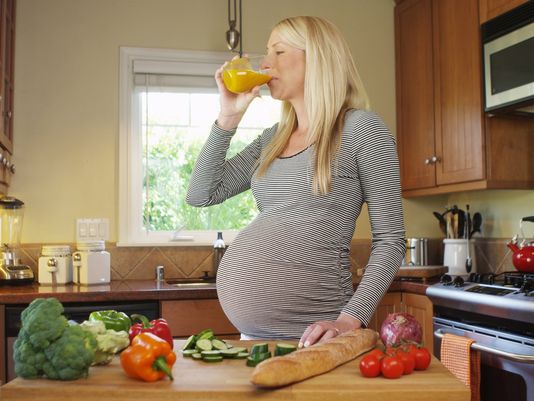 King became “hyper-aware of the effects of too much weight gain before and during pregnancy,” she said. “That was fuel to keep exercising and turn down that extra bowl of ice cream.”

The result: King’s pregnancy and childbirth were smooth sailing, her baby is healthy and she quickly returned to her pre-pregnancy clothes.

If only every new mom were this conscientious, doctors would not be alarmed by the effects of obesity on pregnancy. But according to the U.S. Centers for Disease Control and Prevention, 22.1% of women giving birth are obese (175-plus pounds for a 5-foot-4-inch woman) before they become pregnant.

Just getting pregnant can be thwarted by obesity. A common fertility enemy for obese women is polycystic ovary syndrome, which can disrupt ovulation.

Obesity can cause macrosomia, having too large of a baby, which in turn ups a woman’s chances of having a cesarean section, and that is more dangerous than a vaginal birth.

Anesthesia is more problematic for the obese woman, whether she has a vaginal delivery or C-section.

After pregnancy, the obese mom is more likely to hemorrhage and less able to drop her “baby weight.”

Until recently, researchers said children’s obesity was primarily a reflection of a family’s lifestyle. Now they know Mom’s excess pounds also affect the baby’s propensity toward obesity by rewiring its brain.

“One way we’ve learned this is by studying babies born to moms before and after gastric bypass surgery,” said Dr. Lisa Neff, an endocrinologist at Northwestern Medicine in Chicago. “The babies born after their moms lost weight have fewer problems associated with obesity themselves.”

An obese mom’s fetus is “bathed in the hormones leptin and insulin, which control weight,” Neff said. “His brain is programmed for obesity by having different appetite set (hungry or full) points.”

“These babies have gene mutations that will affect generations to come,” Artal added.

The first trimester is especially crucial, according to a 2014 study of 3,000 women by the University of Southampton in England.

In addition to a propensity for obesity, the obese mom’s baby is more likely to have a neural-tube or heart defect, be stillborn or suffer birth injuries.

The baby is more likely to be premature, too, according to the Seattle Children’s Hospital’s Global Alliance to Prevent Prematurity and Stillbirth. Prematurity increases the baby’s chances of becoming obese, so a viscous cycle begins.

It’s all about education — not just for pregnant women but also for the medical community, Neff said.

The obese woman should view pregnancy as “a great window of opportunity to learn from her doctor and make changes,” said Michael Goran, director of the University of Southern California’s Childhood Obesity Research Center.

■First, achieve good mental health. Liza Vismanos, 36, of Los Angeles worked with a trainer to get “in shape physically, mentally and spiritually” prepregnancy, she said.

■Consult the scale. A normal-weight woman, for example, should gain 25 to 35 pounds during pregnancy, according to the American College of Obstetricians and Gynecologists. Obese women should gain 11 to 20 pounds.

■Listen to your body. “Just as you stay away from alcohol and sushi, stay away from sugary beverages, too,” Goran said. Pregnancy is not a time to indulge.

■Include your partner in your exercise-and-diet team.

■Use an activity device that reminds you to “keep active all day,” Neff said. “Take the stairs, get off the bus a stop early, park in a farther spot.”

■Aim for a realistic weight-loss goal, Neff said. “Even (5%) or 10% can significantly affect your pregnancy,” she said.